AQUATREAT has successfully won the bid among 22 potential bidders, giving competitive and robust techno-commercial offers. The project also includes a strategic pipeline where goes under the capital of the kingdom. The company received the notice-to -proceed letter in June 2022. SIO ordered AQUATREAT to rehabilitate the pumping stations along with its infrastructure channels The two partners have addressed the challenges through a signed contract, and accordingly, AQUATREAT started working on its assigned task.

“We have determined a specific goal for an effortful project” SIO-Riyadh Head.

The main goal of this project is to operate and maintain seven pumping stations for irrigation purposes. Additionally, rebuilding the distribution networks is crucial to preserve the water continuity, which have lengths starting from 100 to 150km with diameters from 110 to 1400 mm. It is noteworthy to mention that the project serves key green spots with water, such as King Salman Park. The ministry has visionary plans for restructuring the stations and network in the foreseeable future according to 2030 Vision.

To continue to carry out the work efficiently, we relied on a team of engineers, supervisors, specialist, and workers. We also counted on cutting edge technologic equipment used in this field to optimize the O&M process. Asset Management, using Maximo is implemented to enhance the facility KPI. This will lead us to achieve significant works in less time and high quality. 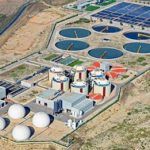